Hi gang! Not many blog posts from me here as November gets going, but for once I have a good reason! This is NaNoWriMo month, the National Novel Writing Month, and I, your humble blogger, was stupid and crazy enough to participate. Look, you can see me right here! That's me! My own page! It's like I'm famous! Yay!

If you're not familiar with NaNoWriMo, it's a collective bit of organized group insanity, in which tens of thousands of people around the world voluntarily agree to set a personal goal: We will each write a novel, in 30 days. More specifically, we need to write 50,000 words in 30 days. There's no "prize" per se, other than the bragging rights that you did it, kind of like running a marathon.

The beautiful thing about it is that they--the organizers, I mean-- go out of their way to empower you to write crap. Because, obviously, unless you're some kind of insufferable demigodlike prodigy, that's what you're going to write in 30 days. All you are really doing is writing a first draft. Which anyone can do of course, and which many of us writerly types say we are going to do "some day"---but what NaNoWriMo forces you to do is commit, to keep going, to not bog yourself down in blood-from-a-stone word-by-word hyperediting or self-criticism. You can't possibly make the goal that way. And so, you write write write. I'm going to quote directly from the official website:

Valuing enthusiasm and perseverance over painstaking craft, NaNoWriMo is a novel-writing program for everyone who has thought fleetingly about writing a novel but has been scared away by the time and effort involved.

Because of the limited writing window, the ONLY thing that matters in NaNoWriMo is output. It's all about quantity, not quality. The kamikaze approach forces you to lower your expectations, take risks, and write on the fly.

Make no mistake: You will be writing a lot of crap. And that's a good thing. By forcing yourself to write so intensely, you are giving yourself permission to make mistakes. To forgo the endless tweaking and editing and just create. To build without tearing down.

For someone like me, this was just perfect encouragement. Knowing that the official group is giving me permission to suck has given me the strength to just do it. And as I'm seven days and 10,000 words into the writing, I can testify in a court of law: My book sucks! My god, I never knew how hard it was to actually do the things that novelists do. I've written, I'm sure, millions of words for public consumption by now, but never in this form. The closest I've come is the Mankind's Last Hope play/sitcom that I co-wrote with my pal Cecil Vortex, but, ya know, that was 1) a co-writing effort and 2) a script, a different beast entirely. 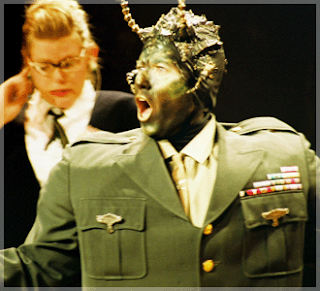 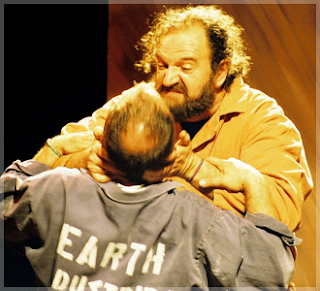 Two images from the live production of Mankind's Last Hope--also with a character named Xanthor!

Not surprisingly, the part that's coming easiest to me, in the novel, is the dialog writing. Lots of fun and I think I've managed to concoct a few laugh lines. The Xanthor sections, too--the mock high fantasy--have been a blast to write so far. But all the rest of it? The character arcs and scene-setting and pacing and descriptive text? So out of my league here. Kinda wish I'd taken more creative writing classes right about now, which would have helped me get experience in some of the basics here. Essay writing, critiques, confessionals, all that I can do, for the most part. But this? This is like telling me to fly a plane.

Still, I persevere! Why? Because NaNoWriMo has given me permission to suck! As I sit down early every morning to grind out 1600+ words a day, I just do not look back. I have no idea where I'm going, who all these characters are yet, and only the vaguest notion of how it's all going to end. But who cares! What laws am I breaking? The chance that anyone is even going to read this first draft, at all, are slim-to-none (sorry!) But if I can emerge at the end of 30 days with a 50,000 word "finished" clump of garbage, it at least gives me something I can actually do a rewrite or edit of, something I didn't have 30 days earlier, and it, if nothing else, is one of those classic "learning experiences" that are so good for all of us no matter how much they usually blow.

Anyhoo, that's what I'm doing this month! So forgive what's likely to be the even-less-frequent-than-usual blog posts. Maybe I can post the occasional excerpt. Maybe. Oh, and, please keep your comments/criticisms/suggestions about EA.com coming, as I'm still actively reading them all and bringing them up with the staff. Lots and lots of work-in-progress behind the scenes at my day job. It may take awhile to see the fruits of my labor, but hang tight. The Master Plan is in effect.

Happy Sunday, everyone!
Posted by Jeff Green at 7:57 AM 64 comments: