Artifice vs Substance vs Me

Well, I guess that's kind of a heady title for my first blog of 2013, but what the heck.  I'm a heady sorta guy!  Except not really!  Mostly I'm a middlebrow guy (at best) who just happens to like what he happens to like.

But what I've noticed in the last few months, as I've been going to a lot more live theater than I ever have before in my life, is how much I actually *like* artifice,  when done right, when done in a way that feels like it actually elevates the content,  or comments on the content in a cool way. That is, I think I'm okay with artists who kinda like to show the strings and ropes, who signal their intentions, who are consciously aware, and make us consciously aware that we are watching/listening to "art" as opposed to "real life."

I just started reading David Byrne's new book How Music Works, and he talks about this a lot. About how, as he grew confident as a performer with Talking Heads, he started incorporating elements of Kabuki theater, etc, into his staging of the Talking Heads live shows, having the lighting and staging actually contribute to the mood and feel of each individual song, rather than just being a "live rock and roll show."  He mentions that not everyone, even amongst the performers, felt equally at home with the idea, that others felt he was sacrificing the spontaneity of rock for a more formal artifice. Byrne, while acknowledging the artifice, does assert, though, that the structure does not have to be mutually exclusive with spirit and emotion, and on this I totally agree.

In fact, the Stop Making Sense tour, around which this discussion takes place, remains to this day my favorite concert experience of all time, in part because the "show" that he presented so elevated the music to me, giving the songs even more weight to them than I'd previously felt. In addition, the entire cadence of the show,  from Byrne walking out on an empty stage, with an acoustic guitar and a boombox, to play "Psycho Killer" solo, to the end, when the entire extended band is joyfully grooving to the afro-funk rhythms of their later stuff, tells a story - the story of this band - in a way I'd never experienced before or since. 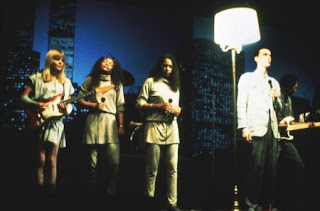 I remember when I saw the show, even at the time, that I was aware how cool it was that Byrne had figured out a way to expand their sound and vision to encompass their ever-expanding audience. When I first saw them, in 1979 at Zellerbach Hall for the "Fear of Music" tour, it was just these four geeky, awkward musicians, playing absolutely intense (and great) music, but with zero flash whatsoever.  Anti-flash was really their thing, as it was for many (most) in the early days of punk/new wave. No rock star poses. No machismo bullshit. No elevating themselves above their audience.  And it was awesome.  Especially for uncool nerds like me, who finally had someone to identify with on stage. But as Talking Heads became surprisingly popular (or maybe not so surprising - given their immense talent, brains, and embracing of catchy pop melody), it was clear - even to a mere fan like me - that their original stage presence/persona was not going to translate to a bigger space too well. I actually worried about it.  "Are their new fans going to think they're boring live?"   And what I discovered at the Stop Making Sense shows (I went two nights in a row) was that Byrne, of course, had figured this out way ahead of me. He thought about the larger spaces the band was going to have to fill, and how, to reach those back rows, he was going to have to think differently, not just sonically but visually as well.  When you're in a small club or hall, the individual intensity of the performers is enough. But in a large space, especially from a distance both the band members themselves and the sound can become lost.  Byrne figured this out and took it as a creative challenge and embraced it wholeheartedly, and said, in the end, it filled him with immense satisfaction. 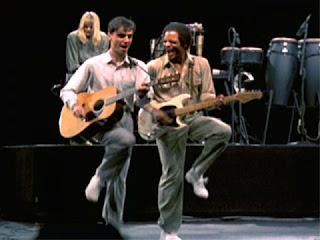 Reading about this stuff, just in the last couple days, was kind of a weird coincidence, since this topic had already been at the top of my mind after my last two experiences at the Berkeley Rep,  seeing "An Iliad" and "The White Snake."  In structure and format, these two plays couldn't be more dissimilar.  One is a one-man show, on a completely bare stage, in which the actor acts/recites/performs The Iliad -  a monstrously brilliant performance that only seems implausible until you remember that that's how The Iliad was presented/performed in the first place, back in Homer's day.  It was oral storytelling, and yet--it was also completely modern, in the way the actor shifted back-and-forth from "classic" text to modern vernacular -- but in a seamless way that didn't feel forced or gimmicky, even as it drew attention to its own artifice. The actor himself was playing a character.  He was a storyteller, THE storyteller, who'd been telling this same story for god knows how long, weary of doing it,  horrified by some of the stories themselves he'd have to tell, tired of praising some of the "heroes",  rebelling against his own job of having to do this.  In doing this, he made the audience - us- characters, too. That is, the performance specifically drew attention to the fact that we were sitting there, that the only reason he was there was because we were there.  We were the ones who were demanding that he do this, one more time. We were the witnesses to his own breakdown.  As with Byrne's songs, all of this artifice only served to make the stories that much richer -darker and more "real."  It was an emotionally overwhelming experience. 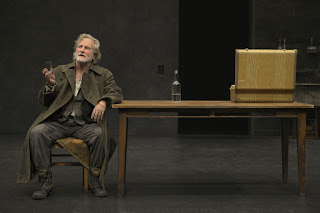 "The White Snake,"  on the other hand, was a gloriously rich and vibrant spectacle, full of wondrous staging, color, and light. It reveled in its own staginess.  And, in fact, the staginess, in this case, did kind of overwhelm the story,  for much of the time anyway....except that it was so brilliant that it was hard to just not sit back and marvel at it all.  Drawing from ancient Chinese folktales,  the play told not JUST the story of the white snake (who assumes the persona of a woman, joins the human realm, and wreaks havoc everywhere), but ALL the stories of the white snake, in all its permutations, as it morphed over the past few centuries.  That is, at times the narrative would almost literally stop dead,  as a character (a "narrator") would come on stage to inform us that "at this point the story  goes in many different directions - we'll go this way" - though in a few places they ALSO give us glimpses of those other paths the story might have taken.  In other points of the production, the actors freeze in place, as the narrator returns to brief us, before the actor unfreezes, on how the scene to come is representative of certain Chinese theatrical stereotypes.  It may seem a bit precious and clever for its own good - except for the fact that in so doing, it acknowledges us as a modern audience,  as people who might otherwise be skeptical or impatient, to tell us WHY we're seeing what we're seeing, as we see it.  Again, the artifice comments on the content.  And, for me, at least, adds a depth to it I might have otherwise not felt.  When, in the play's epilogue, the artifice is dropped almost entirely and the characters are allowed to shine simply as themselves,  it's a moment of near transcendence - the veil lifted to expose the humanity behind the spectacle. 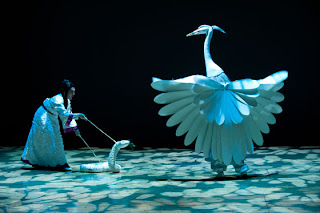 As I think about my own writing - as well as the writers I love - I know that I too enjoy artifice over "realism." In my case, as someone who's still, in the end,  a total amateur and wannabee,  I worry at times that the artifice is a crutch, rather than a tool to get to the truth.  It's being clever for the sake of being clever.  Which, ya know, can be okay, in small doses. But may not be where I'm trying to get to. My first NaNoWriMo book, "The Cudgel of Xanthor," which I honestly hope you can read someday,  was all artifice: It was a dual story.  The story of an incompetent team making a videogame,  along with the story within the videogame itself, in which the reality of the game's main character, Xanthor, kept changing as the game's development kept spiraling further into chaos.  Basically, it was a mildly clever one-joke conceit masquerading as a story.   My second NaNoWriMo attempt, from this past November, I did not finish, but again it was all structure and not much else:  I was trying to write a book in 30 days about a guy trying to write a book in 30 days.  Parts of it were funny, but I ultimately gave up because I realized that all I was really doing was trying to be clever, rather than, ya know, having anything to say.  As it turns out, another story kept beating its way into this one,  which was about my experiences growing up as a teen in LA in the 1970s. It had nothing whatsoever to do with what I was writing, and yet I found myself drifting to it as I was trying to write my clever sentences.  So, at some point, I gave up THAT book entirely, bored with myself, and started jotting down my memories instead - first in the third person, then in the second (!), and then finally, when I felt ready to drop all pretense, in the first.

I don't know really where I'm going with it, if anywhere, but I think I realized something in the process of doing this:  I've been using artifice to avoid being honest, to avoid exposing emotion. In the works I praised above, the opposite was true.  The artifice exposed and informed and ultimately deepened the artistic achievement.  That's what I'd like to do.  I have no clue whether I have either the talent, ambition, or drive to do any of this. Maybe I'll just keep wiling away the years playing videogames, listening to music, seeing movies etc--- enjoying OTHER people's artistic achievements.  Hey, it makes me happy.  But something tells me I'm not done yet.  I've got something in there to get out.  The key now, at age 51, is for me to let go. To stop messing around with "clever" and  go for something much more humble, yet something far, far harder:  Truth.
Posted by Jeff Green at 2:43 PM 32 comments: