Win ME in Little Big Planet!!

I'm not sure whether to be flattered or disturbed or both, but, well, there is this. Apparently, you may now "win" a photo of me upon beating a certain user-made level in the upcoming PS3 game Little Big Planet. Good guy and outstanding game journalist Stephen Totilo, of the MTV Multiplayer blog, alerted me to this random piece of oddness over email the other day, but I didn't fully believe him, or want to, until he made the official post linked above.

Here, by the way, is the photo. I think: 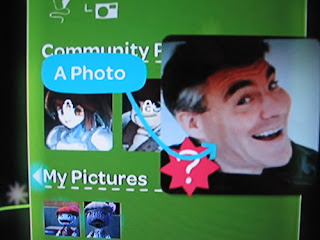 Now, really, whose life wouldn't be better by having one of these on your computer?

Seriously, one can only LOL at such a "prize," but one must also continue to be impressed, in general, by Little Big Planet, which is starting to look like it may very well be the kind of phenomenon that the early hype was claiming it might be. I still haven't seen it running yet myself, in person, so don't ask me no questions, yo. I've only seen the same videos that you have. All I know is that until now I have had no interest in getting a PS3, at all. But after spending some time watching videos of some of the levels that users are creating in the beta, you may now consider me officially intrigued. And that's not just cuz my face is in one of them.

Also: Just because I'm not posting about Kenley dodging yet another bullet doesn't mean I'm not annoyed about it. Also, a personal note to Jerrell: Try designing a shirt for yourself that actually covers your chest for once. Kthx.
Posted by Jeff Green at 10:08 AM

You should totally not tell you daughter about the prize and have her play and win the level.

THANK you for feeling the same way about Kenley as me and my wife. She's needed the axe for WEEKS now.

oh, and you in LBP is awesome too.

Just had to say something Re: Project Runway as I have no one but my wife (whom I love) to talk to about it.

Nice, I can't wait until someone comes up with a Jeff Green Spore creature.

I've missed the last couple of weeks of Project Runway. Luckily, Bravo has a habit of re-running the entire season once a week until the next season starts. I still wish the show was on hulu or something, though. I'm more of a TV on the internet guy now than I ever thought I would be.

Kenley makes me yell at the TV like my dad used to during football games. I really really hate her and can't believe she's so disingenuous to wonder why the other designers don't like her. Hi! It's because you're a selfish, untalented, whiny little brat who can't take any criticism or responsibility!

OK, thank you, that made me feel better...

My game is bought and paid for so i fully anticipate having a Jeff Green Sackboy in my game by months end. If you think that is weird wait till the shrine stages start popping up. Thanks for the tip Jeff!!

I was actually delighted to snag a Jeff Green sticker. I'm goning to go ahead and make a Jeff Green splicer in my Little Big Rapture.

They should have booted Kenley last week. I thought they were going to this week because they were showing her little retrospective and what not, but alas, her time is extended one more week.

I agree with you about LBP, it's the first game on PS3 that has made me want that system... if you know what I mean.

Was that a photo taken from CGW? I was a fan of the GFW podcast who won one of these stickers in the LBP beta earlier this week and couldn't quite decide if that really was you or not in the game.

had no clue who Kenley was until I read the comments...guess I'm not one of the cool kids concerning Project Runway. :)

First working for EA..then being in a game...what could be next, a Sims 2: Jeff Green Pack..

and thanks to you Mr. Green I now attempting to read Steven Erickson, and have been playing Peggle and D&D: Tiny Adventures (I have a 7th lvl Dwarven Warlord..I think thats what it is). Not that I'm complaining to much

LittlebigPlanet Beta Key: Whatever you bid on eBay

Winning Jeff Greens picture by completing a littlebigplanet level that you won't even get to keep after the game has it's proper release: Priceless

Are you sure it's really you?

It looks like it could just be a really happy George Clooney or something.

LBP is one of those games that makes me really consider getting a PS3. But one game just isn't enough to justify that kind of purchase - even with a Jeff Green prize available.

Also, I love that you still update your dinner.

Seriously, Jeff, your wife needs to open her own restaurant.

OMG! So now I have to get both a PS3 and LBP for that prize?! Setting the alarm for tomorrow morning to stop by Gamestop, first thing. xD

Hmm... I'm in the LBP beta. What level do I have to beat to get a Jeff Green face? I have a Wipeout hovercraft and some Space Invaders... guys.

Don't tell the ea bosses thats a conflict of intrest

Ah! Spoilers! And here I just had the last five minutes left to watch on Tivo after work... er, I mean overhear my wife watching.

Looks like LBP is shaping up to be the reason to finally buy PS3!

I'm in the beta and it's everything the hype has made it out to be.

This just convinced me to get the game (not that I wasn't before).

Oh well, I'm glad that there are at least SOME people who have any idea what the hell you were talking about there at the end.

By the way, thanks to your constant encouragement on the defunct GFW, I subscribed to Gamers With Jobs, and it's been incredible (listening for about 2 months now). Thanks.

Be a scary ghost and persuade them to send me one. :(

Ah, and Intern Chris posted this:

Welp, looks like I found the reason to buy a PS3

Jeff your the best average guy I have seen in this really poor world...

Jeff, I totally won you today.

It was in some level called "Houston, We Have a Problem" a neat little simulation of a NASA launch.

I have no idea what this blog was even about?

Currently downloading the beta from the key that I recieved from 1up, cant wait to see the level ^.^

How long have you been riding?

Have you ever been on a motorcycle accident?

What is your favorite curse word?

I actually won you last night. I traveled in a rocket to some other planet, dodge some electrified alien hippies, and drive half way across the planet in a rover just to get it. But I must admit... It was well worth it.

As for Project Runway, im glad im not the only guy who watches this with his wife :)

Everyone hates Kenley, justifiably so, which makes me wonder why the judges continue to let her come back. In fact, I can't figure out why none of the judges has admonished her for her flagrantly rude behavior on the runway, openly laughing while others are criticized. Plus her voice is like nails on a fucking chalkboard.

As for Jerell, the dude is obviously the most talented of the bunch, even if his own taste in dressing himself is very suspect.

Hey, Jeff. This blog could use a little artwork! Just messing with ya.

Glad to see you've got the column going again after GFW mag died. I definitely have missed not getting to illustrate that column....

Makes me want to buy a PS3 and LBP just for that prize, or maybe i can just wire you $600 for some sexier photos, what do you say?

On the other hand, your daughter wont bother you about getting this game for sure, cause it's totally uncool.

Everyone hates Kenley, justifiably so, which makes me wonder why the judges continue to let her come back.

Judges are not in it to find the best whatever this is about. Judges are in it to promote the show as long as possible, which means creating drama. In everyone reality show where someone gets voted off every week, the asshole will stay on for a long time. Why? Because they keep things interesting.

That level frustrated me the first time I played it. I went back and beat it just for you!

Careful Jeff. The prize maker may have a shrine somewhere.

Hmm, I would totally use a Jeff Green gamertag if they had one on Xbox Live!

That picture is actually from the Gamevideos send off video. I just put it full screen and held my PS Eye infront of my monitor.

I 45th all Kenley annoyance.

I got into the LBP Beta thans to the lovely Tina Sanchez. And it's awesome.

It's the rare breed of game you'll be able to play with your family watching, and might make them want to pick up a controller themselves. While at the same time being "hardcore" enough to satisfy even the most jaded gamer.

The beta code is really buggy though. And they seem to be different everyday.

The latest one is one that stops you from getting out of tutorials after you have completed them. And seeing how you can't do anything new without them, it adds up to a lot of resets. Resets that don't just reset the software, but reboot the PS3 it's self.

But when it does work it's great.

I just created a Jeff Green themed level in the LBP beta. It's named "A Race for Jeff Green's affection". You get to race Jeff's new motorcycle. The prize? Jeff Green's love an affection of course. Check it out.

Heh, I just noticed that picture is also in the 1up show's intro over at gamevideos.
Such a nice token of respect.

I just want to say I am greatly enjoying this blog. Thank you for the 1-up podcasts and I hope this new job brings you everything you want.

We just won you by accident... my friends didn't believe me when I explained the photo lol.

You can go to edhardyshirts.com to have a look ,you may find one of ed hardy clothing fit for you
Top qualitymen's jacket,
These cheap jacket are on sale now,you can find
north face jackets inmage on our web
Ralph Lauren Polo Shirts，buberry polo shirts

Do you wannaghd hair straighteners for you own , we have many
cheap ghd hair straightenersin style and great,you can choose one from these
hair straighteners
Authentic chaussure puma
chaussure sport
And chaussure nike shoes
Come here to have a look of our Wholesale Jeans
Many fashionMens Jeans ,eye-catching
Womens Jeans ,and special out standing
Blue Jeans ,you can spend less money on our
Discount Jeans but gain really fine jeans, absolutely a great bargain.
www.crazypurchase.com
China Wholesale
wholesale from china
buy products wholesale
China Wholesalers
http://www.weddingdressseason.com